This article will feature in the Food Politics and Cultures Festival publication, The Daily Gêba

Yet maize grew up with thousands of years of familial development with people in Mesoamerica.  Centuries of breeding and selecting cobs and seeds to perpetuate seed stock for infinite years in the future.  Tracing back years into the past, the closest ancestors maize is recognised to have are the wild teosintes, their thin, short ears are closer to what we recognise as grass as opposed to the plump and swollen cobs of maize or sweetcorn we are so accustomed to, yet many seed libraries carry both varieties, ensuring the wild teosinte is never far away to continue crossing natural adaptation and evolution into the bred strains we are so accustomed to. Teosinte growth is wild, bushy, voluptuous, their flower thin and not as pronounced as their foliage. Maize, however, stands tall and erect, focusing energies on producing seed as opposed to lush leaves and green growth. 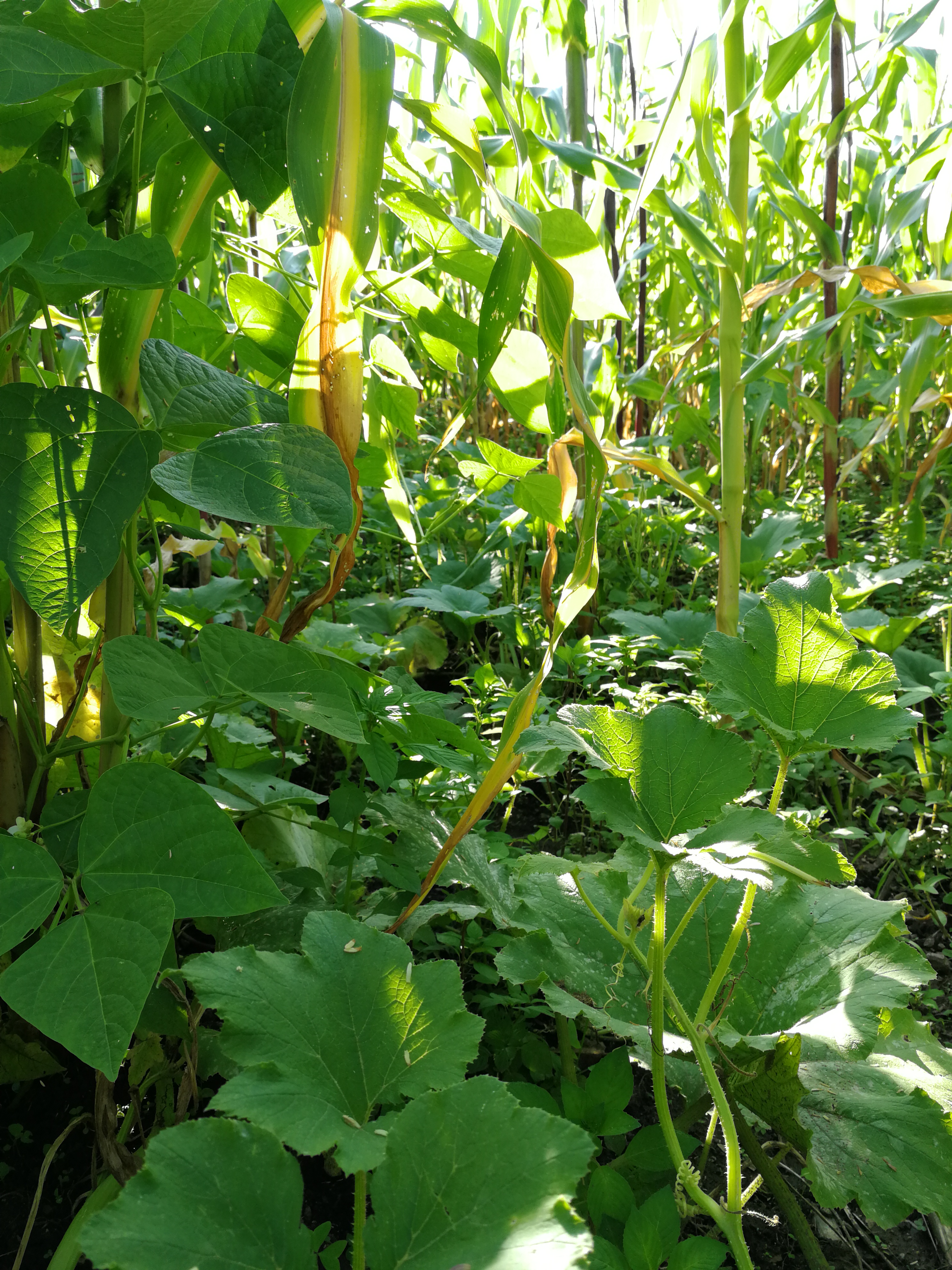 Taking out the kernels of the word teosinte, we see teo is rooted from the Nahuatl word for god, teotl, and cintli as ‘dried ear of maize’, teocintl which then morphed into teosinte some centuries and colonisations later. Teosinte is also known in some places as abuelo, grandfather, a grandfather grass that continues to pass on infinite lineage.

This ancient grassy maize has been continuously cultivated and has many faces, flint corn, maize corn from central america, sweet corn from the north, popcorn from further south. Short and thin, square and flat, raindrop round, some hooked, all maize in all iterations.  Colours ranging from white, red, black, blue, yellow, orange and in Peru as if someone has taken a toothbrush and flicked purple paint on lilac kernels. Mexico is the home of maize and the heart of Zea family. We know borders are illusory, to say one type of maize originates from one country can be misleading, but as a family, Zea resides in a great distribution, all cousins, some distant, some close.

In Mexico, maize is the people and the people are maize, maize is consumed at every meal in many ways. From cool and sweet atole, an almost milky hot drink which is delicious with oats drunk especially for breakfast, or champurrado which is similar but with chocolate, elotes or esquites with their spices or condiments, tamales with maize as pastry wrapped in corn husk, to maize as bread like tortillas or quesidillas, and fermented into tesgüino as sacred beer further north. Maize is eaten throughout the day, every day for centuries, the ultimate staple food. Maize is the people and the people are maize.

An especially delicious delicacy is huitlacoche, a fungus that inhabits some maize and engorges the kernels transforming their colours completely, morphing them into something that looks almost animalia. The fungus takes on a gray hue and when cooked and darkens as if the maize was cooked with ash. This is a pivotal moment in the relationship of maize and people, in industrially grown maize this would be seen as a huge loss, smut is sprayed and controlled, defeated, killed.  Yet it is so sought after and a speciality as it seems this smut has not caught on and survived in Africa. Corn smut is how it’s known in english. Smut is smut is smut, frowned down upon, kept hidden, mostly suppressed.

It could be that maize was imported into Africa in the 16th Century through Portuguese coloniser movement but this is not certain and it could have come earlier by arab travellers. Maize was quickly adopted and spread throughout southern Africa, with broad linguistic heritage. Yet it was only the seed itself which was shared, or at least the only part of the story that stuck. You see, maize comes with an integral culture in Mesoamerica, it is only because of maize that the creation of humanity was successful, maize is the people and the people are maize. Maize is not in singular guided by a singular god or even binary as masculine or feminine (as its botanical understanding would lead you to believe). Maize is thus grown in the milpa, never alone, never without beans and pumpkin or squash.

Milpa is the field of maize so ubiquitous in Mexico, maize the most obvious plant in the field but never without beans or squash or pumpkin or chayote or avocado or sweet potato. Milpa became known as the Three Sisters, namely maize, squash and beans all able to intergrow, maize as dappling of shade and upright growth for climbing beans or other plants, the squash covering the ground and all plants working with each other.  Maize is hungry, it quickly depletes the soil if left to its own devices and will not succeed past a few generations, the beans and squash ensure constant replenishment, not just nutritionally but within their agroecological environment, the insects, micro-climate or waters.

The milpa is thus the extension of maize, or perhaps seen not as separate, it is not male, it is not female, it is both mother and daughter, father and son, child and guardian. Milpa is an extension of survival, without milpa there is no future and no past. Milpa is part of the resistance of the landscape, the seed has been taken care of for thousands of years and defending the seed becomes about defending the territory. On a recent trip to Oaxaca milpa is everywhere, in the region milpa is still strong and has not been contaminated by the monotony of monoculture and genetic modification like further north where the illusory line lives, fences, guns on patrol, men in uniform, check points and long queues separate Mexico from The United States, even though they reside on the same land mass. 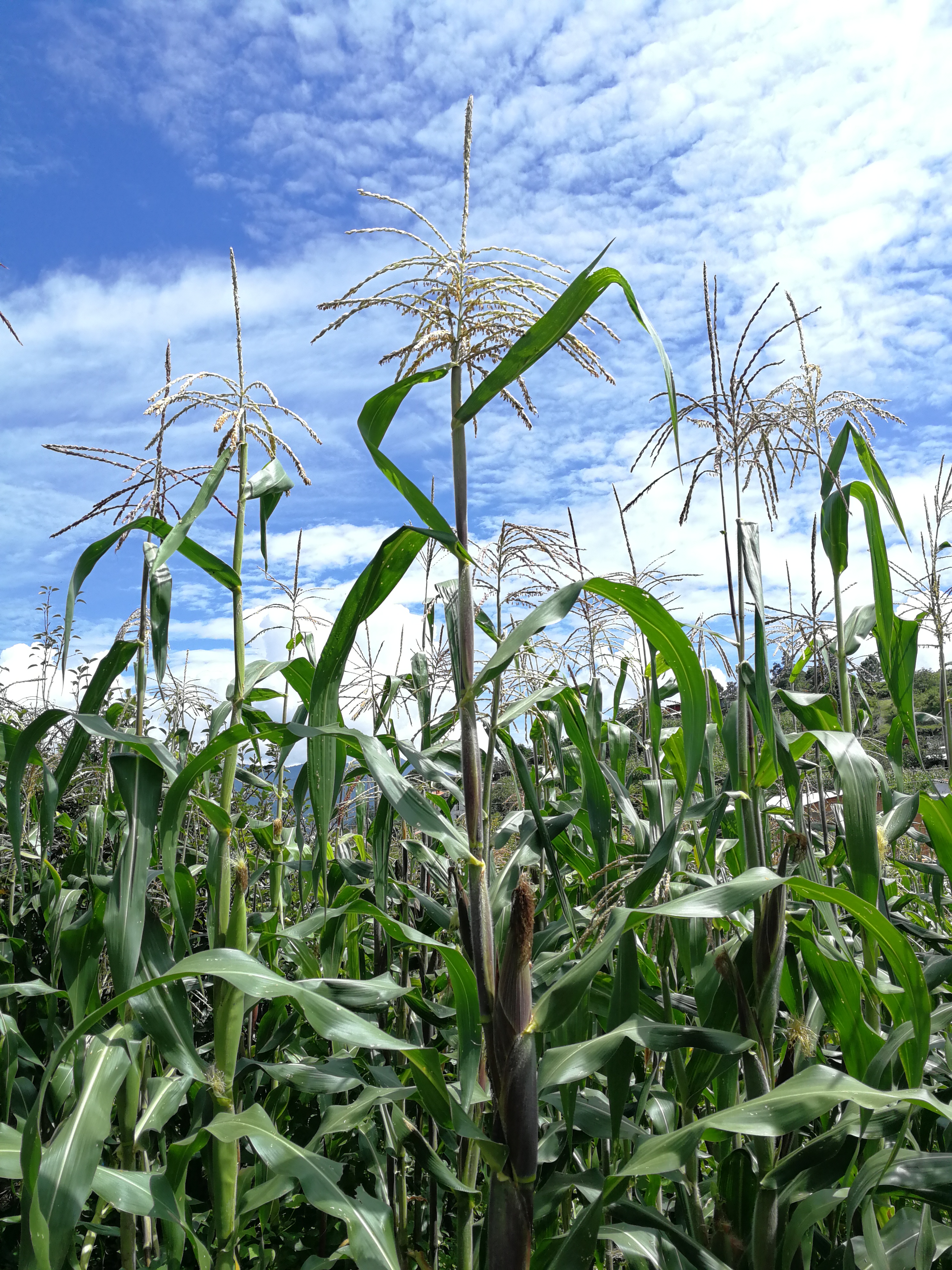 Could it be because of vast uptake of agriculture as seen by the agro-industrial complex and the rapid movement of the Green Revolution in Africa that we don’t often see the milpa in the fields that dot this land? I began to ask farmers about why they farm and where they learnt it from and without prodding, I would begin to hear stories of grandmothers who used to plant these plants together. These same children who grew up to be farmers in the cities with maize rotating in the fields but not grown amongst other seed.

Yet curiously, somehow we missed out on the vital step of nixtamal, the process of cooking the kernels in alkaline solution, kalk, slaked lime or ash. This process pre-digests or softens the kernels to be easier digested like with pozole, a stew or soup using whole nixtamalised kernels, but mostly to allow a glutenesque pliability that makes masa which is the dough used to make tortilla.

In South Africa we suffer a similar maize to the “gringo maize”, maize without milpa, maize without nixtamal, maize without smut, maize without story, maize who is not allowed to grow different to his sister, maize forced into conformity, uniformity, concocted in laboratories and vast tracts of sterile land. This way of maize became a bastardisation of where maize originates and now is the most common form of maize available. Genetic modification of maize is perhaps the height of corporate control, above the state and above government. It is added to most foods processed in its many forms through the agro-industrial complex as thickeners, additives, bulkers, flavourants and so on. So even if you are not eating maize, it is within the foods that come pre-packaged and often cannot be avoided. Yes, it is even often the biggest ingredient in processed breads. Thus a country like South Africa, similar to many southern African countries, consumes maize as a staple too even if you are not eating maize from the cob. Stories of origin often weave their way through us through myth and legend, the inherited stories told through the generations, the story of maize in Africa is no different. As stated, perhaps it traveled with the colonisers, perhaps it travelled with travellers, perhaps it is true that an African variety of Zea mays existed closer to the north and began to be cultivated, and perhaps this was closer to wheat than what we see as maize but these stories have been mostly diluted.

Maize arrived before the Dutch colonised the Cape and was cultivated freely, already with name mielie most likely from the Portuguese milho, travelling through from the east via Mozambique.[1] From milho to mielie, mielie is a creole word that has endured. It seems impossible that maize arrived incognito, of course it came with story, maize is people. And perhaps it arrived with nixtamal, it’s a process that existed here too, perhaps it did arrive in milpa as a mixture of seeds. Maybe this practice was killed during the genocides that are carried out during colonisation, because maize is people and severing knowledge from being passed out is a sure way to ensure extinction of knowing.

Maize is the ultimate Mexican food of resistance, the saying, sin maíz no hay país literally means “without maize there is no country”, the country symbolising the people of the land who continuously work for months to ensure there is nutritious food for families emerging from nutritious lands, using methods that are not written down or documented for something that is so entrenched within the community.  Mexico, like South Africa, has suffered greatly at the introduction of neoliberal policies that govern the government’s and trade within and out of the lands. These policies have come at great sacrifice to many peasant farmers, recognised custodians of land and sea, where local systems of economy were devastated as multinationals and larger corporates were able to control the trade of maize and other crops. 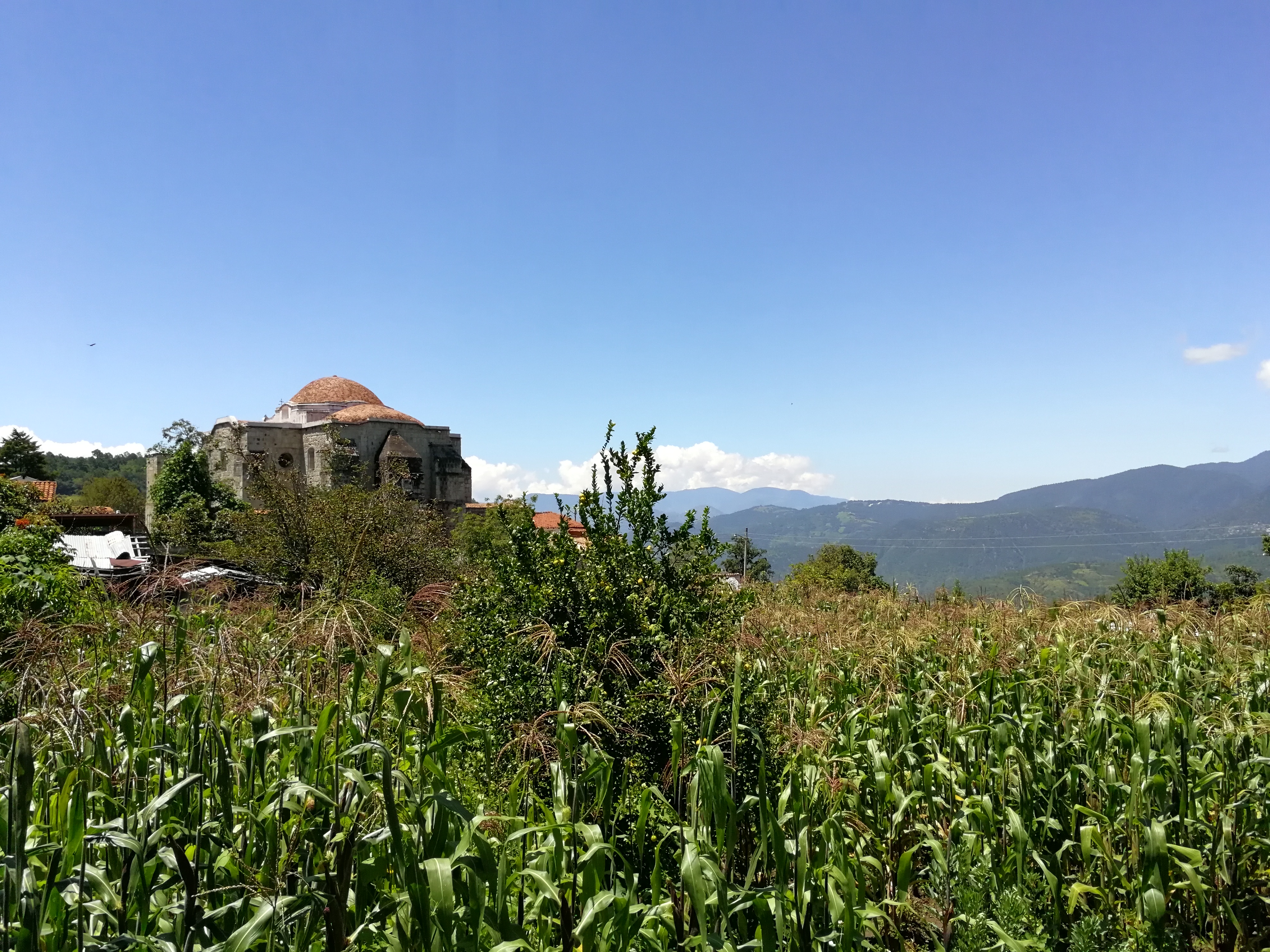 This change also happened at the seed level where maize became conformed to fit industrialised methods of farming, highly mechanised with seeds only able to grow with additional chemical input like herbicides, fertilisers, fungicide on huge tracts of land owned by older white men. Generally these seeds are highly hybridised and genetically modified to be able to survive herbicide, spray designed to kill plants.

This seed was forced to trade out its inherent nutrition in order to become conformed in this way. Speaking of thousands of years of breeding means seeds bred to adapt to hyperlocal conditions, seeds grown with specific recipes in mind, seeds cultivated for feeding families nutritional meals that satiate for hours. Stories of maize drinks drunk in the field while harvesting that is enough to keep tummies full for the day. This is not the story we hear in South Africa, the maize bought and consumed does not have the nutritional bioavailability it once had. Hunger is worsened and no longer felt by the rural poor but very much within urban spaces, where even those who are obese experience hunger and malnutrition.

There is more than enough food, more than enough maize, it is the story of how it is grown, where it comes from, its preparation and consumption that creates a completely different paradigm than maize simply to fill the gap. Indeed this gap is no longer able to be filled if we rely on this contemporary maize which has become the dominant maize.

Maize is the people and the people are maize, this is not just true in Mexico but has global repercussions and implications. Seeing it from an African perspective grants us new commonality with the land from which maize originates, the land and her people. Reclaiming maize from conformity, homogeneity and industry to be freely adapting like it calls to be, is a reclaiming of knowledge and ways of being, working from the seed and land to begin connecting nutrition, family, narratives, grounding for solidarity and enough fertile ground for new seeds of hope.